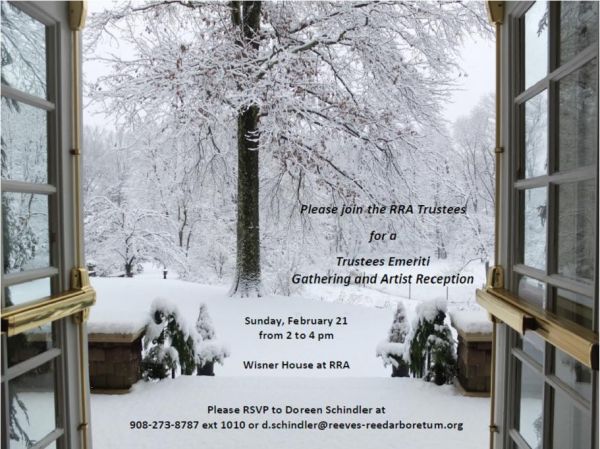 Summit, NJ: What are the criteria for the title Trustee Emeritus? Every nonprofit has its own set of standards for awarding such a designation. At Reeves-Reed Arboretum, the term trustee emeritus is a mark of distinction. It is an honorary title recognizing those former board presidents whose service and leadership were marked by excellence and whose commitment to the institution remains strong. Trustee Emeritus should mean something special to everyone – from staff, current trustees, donors and constituents and the community at large.

On Sunday afternoon, February 21, from 2 to 4 pm, the 2016 Board of Trustees of Reeves-Reed Arboretum, along with the Staff, will host a special reception to salute and honor past board presidents of the Arboretum. Invitations have gone out to the former board officers as well as stakeholders who have or currently support the Arboretum. Adding to the festivities of the occasion will be an artist reception for the current exhibition at the Wisner House Gallery entitled NEW GROWTH, featuring the bentwood sculptures of Susan Manspeizer.
The public is welcome to attend.

For more information about events and activities at Reeves-Reed Arboretum, log on to www.reeves-reedarboretum.org.

Reeves-Reed Arboretum - A place to grow....for everyone!