Sounds of a Summer Night - August 7 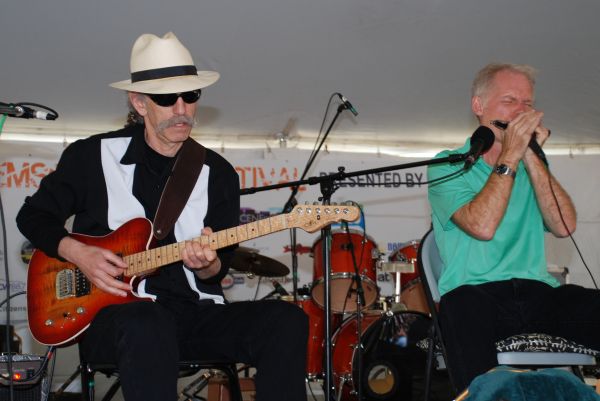 With the BLUES DOCTORS

Summit, NJ:  Reeves-Reed Arboretum is getting ready to rock the rafters with Adam Gussow and Alan Gross, The Blues Doctors, in Goin' Back Home: The Blues in Word and Song, a concert in the garden on Wednesday evening, August 7, from 7 to 8 pm, part of the Arboretum's Sounds of a Summer Night concert series.

The kicking and the stomping will start when Gussow and Gross take the stage to play and strum a hot electric guitar, blow some funky blues harp, and stomp out some thump-and-metal grooves.  Gussow will also share a bit from his autobiographical works, Mister Satan's Apprentice: A Blues Memoir, and Journeyman's Road: Modern Blues Lives From Faulkner's Mississippi to Post 9/11 New York.

Gussow and Gross, a.k.a., The Blues Doctors, are Mississippi-based blues veterans who play a mix of down-home Delta standards and urban grooves from the Texas-to-Chicago axis with some New Orleans funk thrown in.  They're a two-man band with full-on sound: Gussow on harmonica and drumset, Gross on guitar, with both men sharing vocal duties.

Gussow need no introduction to fans of the blues.  Founder of ModernBluesHarmonica.com, organizer of the Hill Country Harmonica festival, he is best known for his twenty-five year partnership with Mississippi-born guitarist and one-man-band, Sterling "Mr. Satan" Magee.  Gross is best known for his long association with Mississippi bluesman, Terry "Harmonica" Bean, and has played guitar with hill country performers Kenny Kimbrough, Lightning Malcolm, and Eric Deaton.

So get a contemporary taste of the old Deep South blues groove with Goin'Back Home, featuring The Blues Doctors, Adam Gussow and Alan Gross, on Wednesday August 7, from 7 to 8 pm.

The Arboretum grounds will close to the general public at 5 pm and reopen to concertgoers at 6 pm for picnicking. Guests are encouraged to bring folding chairs and blankets.  The concert will begin at 7 pm.  There is a minimum $10 donation at the door.  Thanks to underwriting by Investors Savings Bank, this series is free to all RRA members.

Sounds of a Summer Night is made possible, in part, by support from Nick and Tracy McKee, and by the Grand Summit Hotel.  For more information about this series and other programs and events at Reeves-Reed Arboretum, please visit our website, www.reeves-reedarboretum.org, or call, 908-273-8787.

About Reeves-Reed Arboretum:  Celebrating 40 years as a historic public garden and education resource, Reeves-Reed Arboretum seeks to engage, educate and enrich the public through horticulture and environmental education, and the care and utilization of the gardens and estate.  Open 7days a week from dawn til dusk, the Arboretum is listed on both the National and New Jersey State Historic Registers.