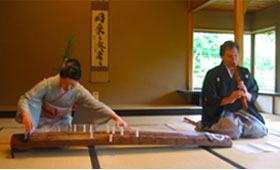 Schlefer, one of only a handful of non-Japanese artists to have achieved the rank of grand master, occupies a special place creating music that bridges Western and Japanese styles. The timeless sound of the ancient shakuhachi (bamboo flute) is at once sensual and spiritual, capable of great emotional depth that has captured the minds and hearts of listeners for centuries. He will be joined by the multi-award-winning musician and singer, Yoko Reikano Kimura. Together they will perform classic and contemporary music for the traditional shakuhachi and the ancient Japanese koto. The evening's event will also feature a special garden walk, led by the Arboretum's Environmental Educator, Lisa Martin, highlighting Arboretum plants native to Asia and Japan.

As a composer, Schlefer has received numerous high-profile commissions and grants; as an educator as well as a performer, his appearances include lectures about the origin, history, and development of Japanese music, and he has performed in several orchestral settings including the NYC Opera, the Juilliard School, Manhattan and Eastman Schools of Music, and at festivals in the U.S., South America, Asia, and Europe.

This final concert of the Sounds of A Summer Night series will take place on Wednesday evening, September 10. The grounds of the Arboretum will open up at 6 pm for concertgoers to picnic. The performance is from 7:00 pm to 8:00 pm. You are encouraged to bring lawn chairs and blankets. The cost is FREE to Reeves-Reed Arboretum members (thanks to underwriting support from Investors Bank). Otherwise, there is a $10 donation at the door for non-members; students are $5 with a valid ID.

Sounds of A Summer Night is sponsored, in part, thanks to support from Nick & Tracy McKee, the Grand Summit Hotel, and the Summit Area Public Foundation. For more information, please check our website, www.reeves-reedarboretum.org or call the office at 908-273-8787.

Celebrating over 40 years as an historic public garden, education resource, and non-profit conservancy, Reeves-Reed Arboretum seeks to engage, educate and enrich the public through horticulture and environmental education, and the care and utilization of the gardens and estate. Open 7 days a week from dawn til dusk, the Arboretum is listed on both the National and New Jersey State Historic Registers. Funding for RRA has been made possible in part by the NJ Historical Commission, a division of the Department of State, through a grant administered by the Union County Office of Cultural & Heritage Affairs, Dept. of Parks & Community Renewal.