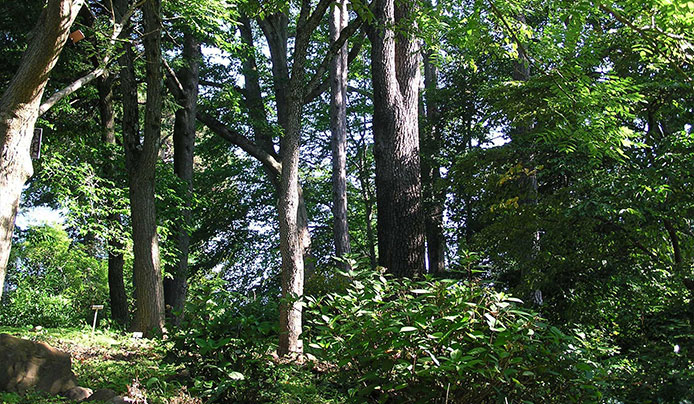 Explore over 6 acres of natural habitat.

Meandering across six acres, there are just under one mile of trails to explore. As a nearly complete example of eastern deciduous hardwood forest, it has four layers of vegetation: canopy trees, understory trees, shrubs, and herbaceous plants. Most of the large canopy trees are oak, tulip, maple, birch, ash, and hickory. The understory trees are dogwood and sassafras. Among the trees are many rounded boulders, called erratics, that were left in the woodland some 17,000 years ago during the retreat of the Wisconsin glacier that covered this part of New Jersey.

Trails were mapped and blazed as part of Reeves-Reed Arboretum's Eco-Corps program in 2011.

The blue blazes mark the Wildflower Trail, which curves behind the Stackhouse Education Center, between the upper parking lot and the front gate. The northern spur of the orange trail explores the lower woodland with topography characterized by a rounded depression known as a kettle, another remnant of the Wisconsin glacier. The trees and other plants found here are species that tolerate poor drainage, since in the spring, the kettle fills with snowmelt and spring rain creating a vernal pool that provides a vital habitat for the safe development of natal amphibian and insect species unable to withstand competition or predation by fish.

In 1996 a native restoration plan was begun, involving the removal of nearly a dozen invasive species and replanting with natives. Volunteers led by both the Horticulture and Children's Education departments, as well as participants in Reeves-Reed Arboretum's Eco-Corps program, continue to work to restore and maintain this native treasure. The October storms of 2011 and 2012 devastated a large portion of mature woodland canopy, and will allow a new succession of forest to grow as pioneer species such as black cherry thrive in the newfound sunlight.