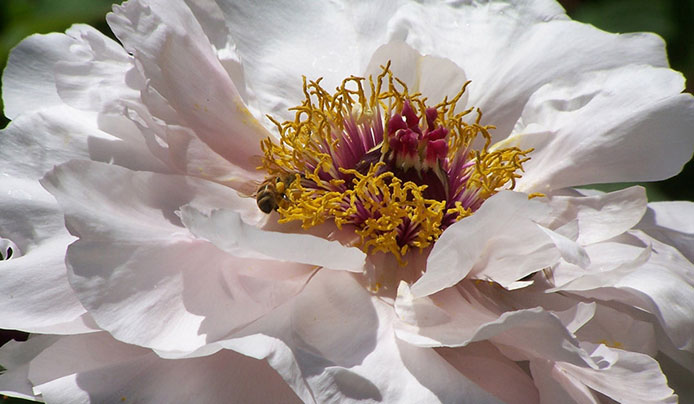 What was going on here before recorded history?

Before European settlers imposed their will on the land that would become Reeves-Reed Arboretum, Native Americans used it as a highway and hunting ground. And before the first humans walked these grounds, the immense sheet of ice that formed the Wisconsin Glacier carved and shaped the landscape in ways that are still recognizable today.

Geology
The terrain on and around Reeves-Reed Arboretum is largely the geological result of recent glacial activity. Summit and its neighboring towns mark the extreme southern extent of the Wisconsin glaciations, and nearby Short Hills is named after the glacial moraine that was deposited by the Late Wisconsin glacier. A moraine is a hill or mound of soils, stones, gravels, and boulders that is pushed along by the flow of the glacier. The Short Hills were created by the same forces responsible for the North Shore of Long Island. The Arboretum boasts several glacial kettles, which were formed by large chunks of ice being left behind as the parent glacier melted. The area around these mini-glaciers was filled with gravels and stones swept along by the run-off from the parent ice. The mini-glaciers then melted, leaving the depressions we see today. Our beloved Daffodil Bowl is really a glacial kettle!

Native Americans
Our area of New Jersey was home to the Lenni Lenape, whose name means "true people," and who were considered by other Algonquian peoples to be the "grandfathers" of the Native Americans who lived in and around the Delaware Valley. The Lenape who lived near Summit would probably have spoken a language called "Munsee" – there are no native Munsee speakers today, although younger Lenape are attempting to revive the language. Lenapes greeted Italian explorer Giovanni da Verrazzano in the 16th century, and subsequent European immigrants were struck by the Lenape's complex social structure and sophisticated textiles. This appreciation did not prevent the Lenape from being caught up in a web of disease, trade, politics, and war that ultimately destroyed their civilization and drove them from their homeland. Lenape communities exist today in Oklahoma and Canada, and more recently a reservation was established on New Jersey's northern border with New York.