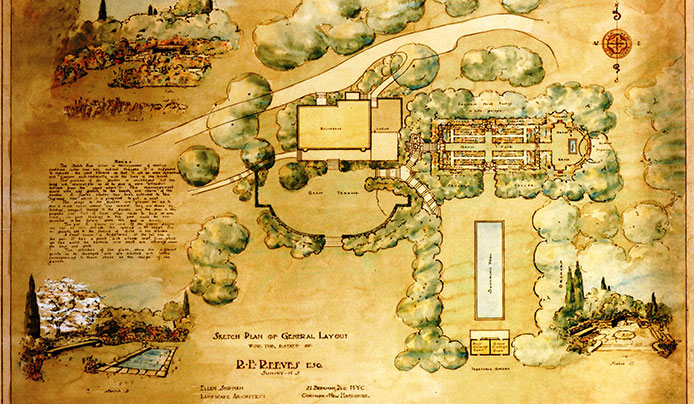 A history rich with landscape-architect visionaries.

Calvert Vaux
Calvert Vaux submitted the original landscape design for The Clearing, now Reeves-Reed Arboretum, shortly after the Wisners purchased the property in 1889 (the original plan is on view in the History Exhibit). Vaux was first a partner of Andrew Downing, the pioneering 19th century American landscape designer, and later Frederick Law Olmsted, whom Vaux recruited into landscape architecture. While working with Downing, Vaux collaborated on a grand scheme to unify the National Mall in Washington, DC, and later designed a memorial urn to commemorate Downing, which still stands on the grounds of the Smithsonian Insitution. He and Olmsted designed Central Park in New York City, an accomplishment which Vaux considered his lifework.

Both Downing and Vaux died in the water: Downing spectacularly, in a steamboat explosion that was the tragic outcome of an unauthorized race on the Hudson; and, Vaux mysteriously, as his drowned body was found after he had taken a walk while visiting his son in Bath Beach near Bensonhurst in Brooklyn, New York. A nearby park was renamed to honor Vaux in 1998.

Ellen Biddle Shipman
Ellen Biddle, who married playwright Louis Shipman in 1893, was one of a handful of successful women landscape architects who bucked the male-dominated field in the early 20th century, and created a body of work that is still admired, studied, and copied today. Her exposure to gardening began early with family connections, but her exposure to the arts was closely related to her residence in Cornish, New Hampshire, an informal community of artists and writers that included, among many other notables, sculptor Augustus St. Gaudens and illustrator Maxfield Parrish. At Cornish, her friends and neighbors included some of the finest artists and designers in the country, and almost all of them gardened. Ellen's professional relationship with painter, architect, and designer Charles Platt led to her first landscape commissions.

After Louis abandoned his wife and three children in 1910, Ellen decided to start her own landscape architecture firm. Eventually, she and her all-female staff had offices on Beekman Place in New York City, although she still called Cornish home for years after. The Reeves family commissioned her to redesign the landscape at The Clearing (now Reeves-Reed Arboretum) in 1924, and although most elements of the design were rejected, her lovely watercolor rendering of her proposed plan hangs today in the office of the Arboretum's Executive Director.

Carl Pilat
The Reeves family largely rejected the landscape plan drawn by Ellen Biddle Shipman in 1924 and hired Carl Pilat to modify and improve on Shipman's design. Pilat had deep ties to the landscaping profession: his uncle had been head gardener at Central Park, and Pilat himself was Landscape Architect of the New York City Parks Department. His charges there included, among other duties, the preservation of the original vision put forward by Vaux and Olmsted.

Pilat was hired by the Reeves family in 1924, and his designs were created late that year and early in the next. An original blueprint with pencil notations presumably in Pilat's hand is stored in the Arboretum's archives. Pilat preserved the natural lines of the property, while at the same time incorporated elements of Shipman's more formal and symmetrical design. He also served as general contractor for the actual work, and evidence of his oversight is preserved in notes and letters to the various contractors involved in the work. Pilat's hand can be seen in the modern configuration of the Rock Pool and the Primrose Path.