On a lovely morning this past April, Dylan Shapiro and I were trying to move some trees that were destined for the hillside above Reeves-Reed Arboretum's fabled Primrose Path. I had rented a miniature walk-behind tractor called a Dingo, and after we loaded the first Avondale cercis onto the bucket, I realized that the Dingo was seriously overmatched. The tree and its substantial rootball weighed at least 300 pounds, probably more, and the Dingo teetered precariously as we crossed the root-ridden lawn. While going over a particularly obtrusive root, the Dingo bucked so wildly that I slipped and slid underneath it. As I fell, I pulled back on the control, and the Dingo backed up over my right foot. Dylan's quick responses saved the situation from getting worse, and remarkably, though my foot and ankle swelled to immense proportions and later displayed some psychedelic coloration, no bones were broken. A few months later, and the whole thing is just an unpleasant memory, accompanied by a few twinges every now and then. (My sister had been in a terrible accident a year and a half earlier, being literally run over by a Bobcat. Our family is now treating construction machinery named after animals with a great deal of suspicion.)

The next day, using a more capable piece of equipment, we carefully moved the trees into position, sliding them into the holes that Dylan had precisely cut earlier in the week. All went well until we got to the weeping, mottled-leafed kousa dogwood, a lovely and unusual tree intended to provide the anchor for the southern end of the border. I tipped the bucket carefully, but not carefully enough – the tree toppled out, and several of the main branches were broken.

Unwilling to sacrifice the tree's major branches, I ran to our workshop, fashioned a few crude cauls out of pine, grabbed a few C-clamps, and returned to the scene of the tragedy. Our weeping kousa has been disfigured ever since by these improvised splints. The good news is, they worked, as the accompanying photo of healthy scar tissue clearly shows. Next year, those ugly C-clamps can come off, and aside from those lumps of scar tissue, our mottled-leaf weeping kousa should be as beautiful as ever.

Injury and healing. It's a pattern that weaves into our lives and into our gardens. The trick is not to focus on the damage – focus instead on the recovery. 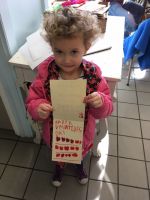