In 1916, the property that is now Reeves-Reed Arboretum changed hands. The Wisner family, who built the house that currently serves as the heart of the Arboretum (and bears the family's name), sold the property to John and Susan Reeves. About six months after the Reeves moved into their new home, the United States entered the first World War, which had already been raging for nearly three years. It was the end of an era in every sense of the word. But the end of one era marks the beginning of another, with its own set of possibilities, opportunities, and risks.

In memory of that age of destruction and rebirth, of despair and hope, we are building the second in our series of Time Capsule Gardens. The first, focused on the year 1940, marked a similarly momentous transition in both the history of the world and the history of Reeves-Reed Arboretum. This year, we celebrate the beginning of Susan Reeve's tenure at the property, during which she effectively transformed the grounds into what we see and enjoy today.

The Time Capsule Gardens include only plants that would have been available to gardeners in the designated year. So this year, what you experience in the 1916 Time Capsule Garden will be what Susan Reeves might have dreamed of as she surveyed her new home. The Garden is located in a brand new bed in the New Rose Garden, between the old rose garden (now appropriately named the Susan Graham Reeves Rose Garden) and the Herb Garden.

The empty bed you see in the accompanying photograph is to the gardener what a blank canvas is to the painter. No one knows what the final creation will look like in a few months, but we hope it will evoke colors, forms, and fragrances at least a century old. Come explore 1916 beginning in late May!

We want to give special thanks to our friends at Merck Pharmaceuticals, who created this lovely bed in a single sunny afternoon. 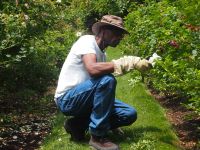