The cultural and political legacy of Thomas Jefferson is complicated, just as the man himself was. The man who wrote that "all men are created equal" kept other human beings as slaves. The man who kept slaves also wrote "The whole commerce between master and slave is a perpetual exercise of the most boisterous passions, the most unremitting despotism on the one part, and degrading submissions on the other. Our children see this, and learn to imitate it." The man eventually elected to lead the new nation was notoriously unable to control his own impulses, finding himself often in debt, and fathering children on a helpless woman who was unable to give her consent, even had she wanted to.

Jefferson himself only wanted three of his accomplishments to be memorialized on his tomb: his authorship of the Declaration of Independence, the Virginia statute for religious freedom, and the founding of the University of Virginia. I like to think of another Jefferson, the man who said towards the end of his life, "But though an old man, I am but a young gardener." It is probably the closest I will come to fully understanding a part of the vast Jeffersonian mind.

Thomas Jefferson is in my thoughts because a plant that he grew long ago at Monticello has just flowered on the Arboretum grounds. It is the snail vine, Vigna caracalla, currently in auditions for next year's Time Capsule Garden between the rose garden and the herb garden. It is the first time I have successfully flowered this exotic and fragrant plant, which I first saw many years ago on the grounds of Jefferson's home. I will never fully understand Jefferson, but looking at the coiled purple-and-white flowers of V. caracalla, I can at least share an experience with him over the intervening centuries. 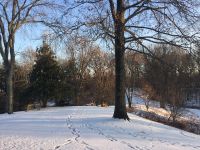